So not a lot of painting this week although I did manage to get the Unidron with the Missile Launcher  finished, so now I’m just missing the Plasma Sniper. With the revelation of the new sectorial for the Combined Army, The First Contact Force Onyx and new Combined Army drones at GenCon, I know that there will be a lot of Combined Army in my future. 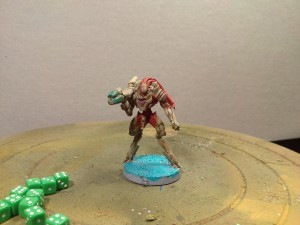 On the games front I managed to get a half game, a half game? you say… well, we stopped halfway because it was becoming late and it was a work day. We played the Supplies mission. I played a Caledonian Highlander Force, the same force I had played the week before in BioTechVore. My opponent fielded a Morat Aggression force. As we ended early there is not a lot to tell. I scored some early success when I grabbed a supply box. But the Sogarat fireteam was impervious to my attacks and killed any who dared to cross their path. I had more luck with attacking his support troops and incidentally wiping out all of his specialists. When we ended the game, we called it a gentlemens draw. At that point it was only a question about if I could keep my Dozer with the objective out of LOF from his fire team.

Some things I learned: I need to be quicker with my turn, when my model count exceeds 15+.  Sogarat are crazy scary and my Missile Launcher Scot Guard is very unlucky. That was the second game he shot at an enemy, where the odds were in his favor and my opponent killed him with a crit.  🙁