So I have been hard at work finishing my Ariadna miniatures so I can be ready when the USAriadna army box arrives. This week is mostly about the 45th Highlander Rifles… I finished the three unpainted ones I had, bringing total up to five, – you can never have too many crazy Scots. I also painted my Caledonian Mormaer, – with Arm 5 and V:Dogged he has some serious staying power. 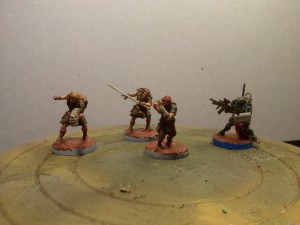 Friday I played against Simon, – it was a very close game ending in a lose for me. We played the mission called Biotechvore. It has area where there is a nano plague. The area covers the 8″ deployment zone and extending another 8″ and if you end your turn in the affected area, you take a dam 14 BTS roll (yikes!).

I got first turn and tried to get as many of my models out of the Biotechvore area. My effort was hampered by the fact that Simon had placed his TAG so that is had a excellent field of fire. In the end I killed it but the price was high. As my round ended, 8 of my 17 models still remained in the danger zone. Due to my terrible rolls they all died.

Then it was Simons turn and he proceded to beat the stuffing out of my army, killing a good half of my remaining models.  However I did manage to block his advance so he was not able to get all of his models of the zone.

In my second turn I looked what was left of my army, – 4 models – not a lot but still my opponent was down to 8 models. So a brave 45th Highlander threw himself in front of a fireteam of Kaisotsus firing his boarding shotgun. He took out two of the already depleted fireteam. Meanwhile on the opposite flank Uxia killed a Kempeitai who turned out to be the enemy LT. Unfortunately she was killed by the return fire from a Karakuri.

Simon’s second turn was mostly spend trying to get his remaining troops out of harms way and dealing with LoL. A Karakuri exploded, from the damage dealt by the Biotechvore zone, narrowly avoiding a nearby HVT.

My final turn. At this point there was only three models on the table. William Wallace, a Karakuri and a Kaisotsu. William Wallace move up and fired at the Karakuri, – killing it. However he took return fire from its Chainrifle and went down. Some frantic measuring ensued, as the remaining Kaisotsu was very close to the now exploding Karakuri. However the gods smiled upon the Kaisotsu and he was not hit by the explosion.

Siomon’s final round with just the Kaisotsu on the table. Simon was able to move him up and secure my HVT netting him a total of 4 VP.

I have never played such a crazy game. It was fun and challenging.