So in the past week I got the last of my Daturazi – Witch Soldiers done. So now I’m ready to focus on Ariadna force which is hopefully about to get some serious reinforcements in the form of the USAriadna Army pack. The reason I didn’t get more model finished this week is that I have been working hard on my USAriadna terrain. But that is another blog post. 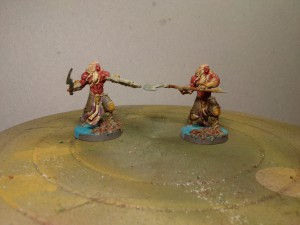 I did find time to play a game of Infinity this past week. It was very close, I played Ariadna  and my opponent fielded a Nomad army. The mission was Beacon Race and it was very closely fought but in the end I lost.

The battle started with me going first. I opened the mission room and got a Beacon, however I lost a S.A.S to a well placed Crazy Koala. I also ran a 45th up one flank and killed a Moran. However my opponent did not take the bait a reveal a nearby camo token. When it was his turn, my opponent let his Iguana out of the building, that it had been hiding in but as it exited the building a Marauder with a Heavy Rocket Launcher was able to draw a bead on it through the mission room and it got a rocket in the face. The pilot barely survived and used the ejection system. This was to prove a blessing in disguise for my opponent as the pilot would be a serious thorn in my side the rest of the game.

The second turn was spend mostly on consolidating your positions and trying to kill as many of each others models as possible, with me loosing more than I killed. As the third turn began the game was still tied, so I decide to gamble on a long shot. I hoped that the superior PH of Uxia would give me a chance a of securing one of my Classified Objectives (to blow up a near by IFV) but a critical from my opponent quickly ended that. So I thought let go for a draw, and just make it impossible for my opponent to enter the mission room. My opponent had other thoughts though and went straight for his Classified Objectives and was able to secure one of them by repairing a damaged REM. So the game ended 3-4.

A final note, I must remember to take some more photo’s next game.