So, it was a slow week on the painting front with only a single model finished, but in my defense I spent most of my painting time finishing a couple of hills for my USAriadna table (there will be a blog post about that tomorrow). The model I finished was a Unidron with a Spitfire. 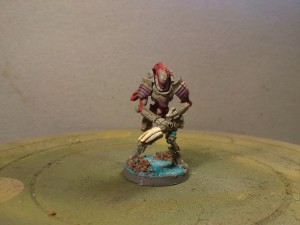 On the game front things went better. On Saturday a couple of us had made plans to meet in the local gaming club and play some infinity.  That pulled other Infinity player in and before we knew it there were 5 games going on.

The first game was a demo/trial run against a new player. We played Supremacy from the ITS pack and it was a very interesting and fun game. On one flank my Sú-Jina Immediate Action Unit dominated while on the opposing flak my opponents Dog-Face was unstoppable. The game ended with a loss to me.

The second game was a win for me. It was unfortunately not as closely fought as the first game. We played Transmission Matrix, a mission that I had not tried previously. The star of the game on my side was my Yân Huô armed with two missile launchers. That thing is a brute! The fact that each antenna was a repeater was used to some effect by my opponent. So each round I basically had to use a order on my Hacker to execute the Fairy Dust support program, giving the four HI’s on my side a Firewall.